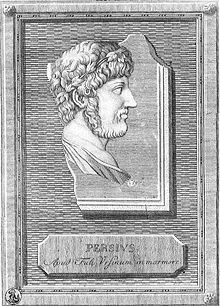 When compared to Juvenal or Horace (the two most prominent figures of Roman satire in sixteenth and seventeenth century England), Persius’ impact on early modern satire has usually been considered slight. In the article, Persius’ Prologue and Early Modern English Satire, R.Clinton Simms of Chuo University, Tokyo demonstrates, with particular reference to the ‘Prologue’ to Satire 1, that early modern satirists were eager to engage this Roman poet and were, in fact, more eager to adapt Persius than merely imitate him.

In “Persius’ Prologue and Early Modern English Satire” the author selects readers and respondents in order to show the frequency of engagement with Persius. It is put forth that what makes Persius’ satiric presence unique is the variety of modulations. The adaptive project leads to a greater variability in what happens next, and the sense of remove and marginal status that Persius invokes is easily appropriated, and offers armature for a range of poetic voices.

Whilst early modern authors may not necessarily have felt allegiance to Horace or Juvenal, the voices of these two satirists are more readily detectable than that of Persius. The latter’s strains are less easy to detect, being more creatively interwoven with English poets’ own concerns.

“Persius’ Prologue and Early Modern English Satire” concludes that this difficulty in detecting Persius’ voice, as opposed to those of Horace and Juvenal, is likely to be the reason why the reception of this morally respectable Roman satirist has remained largely under-explored in the scholarly tradition.

Translation and Literature publishes critical studies and reviews primarily on English literary writing, of all periods. Its scope takes in the reception of ancient Greek and Latin works, the historical and contemporary translation of literary works from modern languages, and the far-reaching effects which the practice of translation has, over time, exerted on literature written in English. It embraces imitation and adaptation, including adaptation into other art forms; the theory of literary translation; and publishing history. It also publishes significant historical translations edited from manuscript sources.

A cumulative index of all articles from Volume 1 to the present is available here.

Find out how to subscribe, or recommend to your library.