Gilles Deleuze (1925–95) is the contemporary philosopher to whom Badiou returns more than any other. His engagement with Deleuze is however neither homogeneous nor unequivocally critical, as it is often thought to be. In short, Deleuze figures in Badiou’s work as his preeminent philosophical disputant.

The first of these – a heavily politically inflected series of rhetorical attacks – ran throughout the late 1970s. During this period, Badiou (in his own name and, on one occasion, under the pseudonym ‘Georges Peyrol’) attacks Deleuze’s work, using what he calls ‘the heavy verbal artillery of the epoch’ (DCB 2), primarily with reference to the texts co-authored with Felix Guattari – above all Anti-Oedipus and the short text on rhizomes that would later take the form of the introductory chapter of A Thousand Plateaus. At stake for Badiou at this juncture is what he takes as the retrograde political consequences of these texts.

While Deleuze and Guattari appear committed to revolutionary activity, Badiou argues that this is only superficially so. In reality, what underlies the apparent radicalism of the philosophy of desire, flux and novelty found in these works is a commitment to the most conservative moments in the history of western philosophy: a pre-Hegelian investment in the notions of freedom, the autonomous subject, and the Good. In sum, a ‘return to Kant, that’s what they came up with to exorcise the Hegelian ghost’ (FP/AFP 79). As a consequence, Badiou presents the approach of desiring-philosophy as entirely irrelevant to contemporary political struggle, adding ‘saint Gilles (Deleuze), saint Felix (Guattari)’ and ‘saint Jean-Francois (Lyotard)’ to Marx’s Saint Max (Stirner). For Badiou, their philosophies, committed as they are to ‘propulsive desire, evasive flux’, to ‘the heterogeneous’, and to the critique of ‘all organisation’ and ‘ “totalitarian” Marxist-Leninism’, merely repeat ‘word for word’ the kind of claims that Marx and Engels’ German Ideology needed to ‘tear to pieces’ in order to present a cogent revolutionary program (TC/AR 61). Finally, and as a result, Deleuze and Guattari’s work is not just irrelevant to the political program espoused by Badiou, but deeply hostile to it: despite the rhetoric of revolution – to cite the strongest of Badiou’s formulations of the period – ‘Deleuze and Guattari are protofascist ideologues’ (FP/AFP 51).

This bruising textual engagement runs alongside a series of interruptions of Deleuze’s famous seminar at Vincennes by Maoists with whom Badiou was associated, and in fact in DCB (2) he even notes that he led one such intervention himself.

By TS, however, a shift has taken place, ushering in a second, considered period of sustained engagement with the content of Deleuze’s thought. There, Deleuze is presented no longer as an ideologue but rather a philosopher. To be more precise, the commitment to flux and change in Deleuze’s work is taken by Badiou to be a philosophically important commitment and not just a bourgeois affectation. In TS, Badiou will assert that this commitment to flux, or ‘dynamism’, is one of the two foundational orientations of materialist thought, but that Deleuze, insofar as he privileges this at the expense of the equally important ‘mechanist’ hypothesis, fails to attain a rigorous materialism.

In this book, Badiou will also assert three other claims of Deleuze’s philosophy. First, he argues that Deleuze’s dynamist philosophy commits him, perhaps paradoxically, to a kind of naturalism. Deleuze is, on this account, ‘a wandering materialist, a vagabond philosopher of natural substances’ (TS 209). Second, Badiou argues that, by virtue of the neglect it shows to the mechanist facet of materialism, Deleuze’s philosophy hypostasises novelty: it ‘follows a perspective of flight. It is a radicalism of novelty. It breaks all mirrors’ (TS 207). This latter assertion is one that DCB, published thirteen years later, will explicitly abandon. However, the third substantial claim made of Deleuze in TS remains at the heart of this most important of Badiou’s texts on Deleuze: that Deleuzean philosophy is in fact not a theory of multiplicity but the elaboration of radically unified theory of Being. Badiou writes that ‘There are others, like Deleuze, who posit the Multiple, which is never more than a semblance since positing the multiple amounts to presupposing the One’ (22).

The central moment in Badiou’s discussion of Deleuze is in keeping with this – however brief – genuine consideration. DCB, as Badiou notes in the first chapter, is the final entry in a long epistolary sequence he undertook with Deleuze between 1991 and 1994, whose purpose was to clarify the differences and coincidences between their respective projects.

The main thesis of DCB is infamous. Contrary to ‘an image of Deleuze’ that sees him as the proponent of ‘the heterogeneous multiplicity of desires’ (DCB 9), Badiou asserts instead that ‘Deleuze’s fundamental problem is most certainly not to liberate the multiple but to submit thinking to a renewed concept of the one’ (11).

It is essential to see that this key text – like Badiou’s review of Deleuze’s The Fold, published in 1989 – is not in the main a critique of Deleuze, but an attempt at an explication of his position that undoes what Badiou sees as a mendacious and misleading caricature, and a particularly striking attempt to mark out their differences.

The Clamor of Being is tripartite in structure. It begins by asserting the general claim that Deleuze is a thinker of the One, and then this claim is then fleshed out in a characterisation of Deleuze’s method. For Badiou, regardless of the topic under investigation (Sacher-Masoch, Leibniz, cinema, differential calculus, etc.), Deleuze always proceeds in the same way: he begins with the particulars of the case, and then moves from this instance to the primordial status of the One qua ground and source. However, this method (which Badiou calls intuition, having recourse in a broad sense to Deleuze’s account of intuition in Bergson) is not an external method imposed upon particular cases, but doubles in thought the constitution of reality itself. If Deleuze begins with the action-image in the classic cinema and then thinks it as an indirect time-image, thereby reinstating its connection with the open Whole, it is because this is the ontogenetic structure that underpins the action-image as such. Likewise, if the paintings of Francis Bacon are of interest to Deleuze, it is insofar as their manifestation of the vital One can be so directly and powerfully traced. In place of the demand made by phenomenology to return to the things themselves, for Badiou Deleuze’s insistence is to return by way of things to the ontological ground on the basis of which they arise. This is the sense in which Badiou’s claim that Deleuze is an ascetic thinker must be understood. On his view, Deleuze’s method only becomes available to thought by discarding the external impositions that habit imposes upon thinking itself. Finally, taking a series of key concepts in Deleuze’s work as his material, Badiou then goes on to show how this methodological structure bound to the aegis of the One and its role in ontogenesis is played out in them. The concepts that Badiou examines – the virtual, the event, truth and thought – are not chosen at random, being the touchstones of Badiou’s own work in the circle of publications surrounding and including BE: being, event, the subject and truth.

Now, while DCB is fundamentally explicatory in nature, it is not slavishly so. On the one hand, Badiou throughout marks his distance from Deleuze as he construes him. As he notes, both the book and his exchange of letters with Deleuze had the aim of getting ‘straight to the sensitive point at which different conceptual creations separate’ (DCB 5). The goal therefore is as little to critically dismiss Deleuze’s work as it is to unambiguously praise it. Instead, Badiou attempts something like an inclusive disjunctive synthesis, to use a category from Deleuze’s Logic of Sense: a bringing together of two contrasting positions in order that their differences come to light. On the other hand, Badiou does mount a single important critical argument at Deleuze’s thought in DCB. While he sees Deleuze as a thinker fundamentally committed to the One, Badiou argues that Deleuze’s philosophy does not itself provide the requisite means to support this commitment itself. Specifically, Badiou argues that the virtual/actual couple stand at the centre of the Deleuzean edifice, but that Deleuze cannot maintain the reality of both the virtual and the actual at the same time: ‘The more Deleuze attempts to wrest the virtual from irreality, indetermination, and non-objectivity, the more irreal, indeterminate, and finally non-objective the actual (or beings) becomes’ (53). As a result, not only the virtual/actual pair but the entire One-multiple structure of Deleuzean philosophy comes apart on Badiou’s account.

In the texts on Deleuze immediately following DCB, the sense of a common project pursued in two different fashions itself starts to unravel, and Badiou increasingly comes to insist on an exclusive disjunction between his philosophy and Deleuze’s. The differences between the two projects, rather than their closeness, is more strongly emphasised, and the goal of obtaining the sensitive point of divergence is gradually replaced with an external opposition of two blocs of thought. Furthermore, while the genre of these more recent statements remains philosophical, some of the rhetorical flavour of the texts from the seventies begins to return. ‘One, Multiple, Multiplicity’, Badiou’s somewhat bewildered defense and restatement of DCB, while beginning ‘at the point of greatest proximity’ (TW 68) depicts Deleuze’s philosophy as a ‘natural mysticism’ (80) which impoverishes (70) and metaphorises (75) mathematics, and neutralises formal thinking as such by subordinating it to empirical sensibility. Many of these points are also made in ‘Deleuze’s Vitalist Ontology’, another text from the period immediately following DCB.

In the chapter devoted to Deleuze in LW, titled ‘The Event in Deleuze’, the disjunctive quality of Badiou’s approach is even more evident. He claims there that it is possible to arrive at ‘a pretty good good axiomatic for what I call “event” ’ (384) by inverting Deleuze’s philosophy of the event. Most recently of all, in the notes which close his Pocket Pantheon, Badiou is to be found presenting the two respective positions in starkly opposing terms: ‘I learned to love Deleuze, but from within a controversy that would not die down. At root: Platonism and anti-Platonism’ (PP 194; tm). This is in keeping with the claim found in LW that ‘there are only three crucial philosophers: Plato, Descartes and Hegel. Note that it is precisely these three that Deleuze could not bring himself to love’ (LW 552; tm).

Thus at the end of this lengthy tripartite engagement, there is something of a synthesis achieved between the rejection of Deleuze’s philosophy that dominated the first period, and the more considered approach that characterised the second. 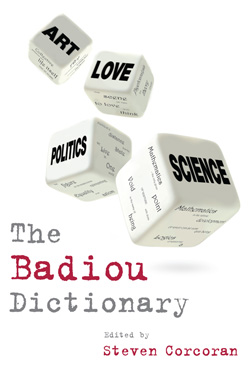 DELEUZE is an extract from The Badiou Dictionary edited by Steven Corcoran, published by Edinburgh University Press.

Visit the book’s page on the Edinburgh University Press website to find out more and see the full list of entries and contributors.

Jon Roffe is Vice-Chancellor’s Postdoctoral Fellow at the University of New South Wales. He is the co-editor of several books published with Edinburgh University Press: Lacan Deleuze Badiou, Gilbert Simondon: Being and Technology and Deleuze’s Philosophical Lineage.