The 2017 Eurovision Song Contest was won this year by Portugal’s entry, with a singer called Salvador Sobral, who sang a simple, heartfelt song of love and loss. Over and against the elaborate stage mechanics and outlandish attempts at eclecticism and edge of many other countries’ entrants, the coalition of voters comprised of the publics and juries of 42 countries voted for a highly traditional and clichéd performance of male unrequited love for a former lover. With my having written a whole book on the topic, the song’s victory stood out to me immediately indeed as an example of the persistence and popularity of the sentimental mode in contemporary media culture. Although not cinematic per se, it dramatized perfectly some of the discussions examined in Improving Passions with regards to the representation of emotion and virtue in moving-image culture. In formal terms, Sobral’s performance rehearsed some key tropes of the Musical genre in its focus on the lone individual and his or her expression of true, sincere feeling. Coded as an address to his beloved, the performance maintained the fourth wall of classical theatrical performance, dispensing with any conventions that may have drawn attention away from the character portrayed and the simple message he conveys. While many other entries drew on modernist techniques of genre-blending, direct address to the audience or the foregrounding of extravagant spectacle and movement, Sobral’s song shared in an aim of much melodrama of simply conveying a performance of ‘Virtue-in-Distress’ (Brissenden, 1974). The human face is foregrounded in particular by such numbers as a sign of legibility and moral sensitivity, privileged over (and sometimes even against) the artifices of language or misleading rhetoric. As echoed by film theorists like Béla Balázs (for instance, in his elaboration of the ‘silent soliloquies’ of characters visualized in close-up in the early pre-sound cinema), the faciality of the sentimental performance sits here in counterpoint to more constructed or potentially misleading signifying categories.

Sentimentalism emerges from the above analysis then as a mode aligned almost foundationally with debates concerning representation, affect and ethics. Drawing on Richard Dyer’s discussions of the Musical genre and its invocations of ‘Utopia’, we can say that Sobral’s address articulated a romantic and idealistic yearning for love and togetherness as a function of its denial. His beloved is absent both physically and narratologically (the relationship seems to be over), allowing the ‘number’ to serve as a brief negation of the loss and suffering it communicates. As with Elton John’s rendition of ‘Candle in the Wind’, at the funeral of Diana, Princess of Wales, the sentimental number is predicated on nostalgia and loss, allowing absence and/or death to be briefly negated or falsified by the presence and plenitude of human performance and spectacle.

What seems at stake in such considerations is an issue central to film and cultural studies in their longstanding interrogation of classical Hollywood cinema, specifically the problematics of cinema’s engagement of narrative, character and our own moral sympathies as spectators. As observed by the cognitive film theorist Carl Plantinga, we are often very cynical about classical cinema’s apparent insistence on emotional legibility in characters, especially when we are encouraged to be equally, if not more, attuned to signs of modernist or postmodernist complexity or ‘edge’ in mise-en-scène (1997). Even when we (and by ‘we’, Plantinga means critics and film theorists in particular) allow that melodramatic conventions form a staple of cinema’s expressive palette, there is often still surprise (and dismay), as with Sobral’s victory or indeed the famous last ten minutes of a Hollywood film, that sentimentalism is still drawn upon in contexts that otherwise seemed unamenable to its simple logic of alleviating ‘virtue-in-distress’ or ‘justice-in-jeopardy’.

As a field of discourse that both promotes and questions the meanings and values of emotion in relation to themes of love, community and individual virtue, sentimentalism is indeed both reviled and integral to cinema; dependent on a nauseating mannerism in filmmaking for some, indispensable to others as key to cinema’s ethical and political importance, not least in the age of digital media and the omnipresence of screens. While we may live in an age of what Steven Shaviro refers to as ‘postmodern emotions’ (2004), the media objects we engage with affectively often still adhere very closely to generic criteria handed down from old traditions of representation. While the ‘postmodern’, for instance, entails a cultural ‘promiscuousness’ of formalist multiplicity, pastiche and/or irony, our cultural experiences are continuously confounded by various formal and affective tensions. Was it possible, for instance, to like Sobral’s song without really thinking about its artistic integrity? Was it a case of adopting a ‘camp’ reading protocol of ‘so bad, it was good’? Or perhaps context was key, and Sobral’s performance seemed ‘post-ironic’ in its negation of modernist devices that seemed themselves hackneyed and overplayed.

The critical appraisals and analysis of its sentimentalism can indeed become surprisingly complex once we begin to consider the longstanding codes of representation operative in something so ostensibly two-dimensional as Sobral’s entry and the representational codes his performance drew upon. It is this kind of scrutiny of a form often considered bereft of artistic or cultural merit that Improving Passions focuses on as both a key corollary to the melodramatic mode underpinning the cinema and an important category of taste in its own right.

Charles Burnetts teaches film in the Department of Philosophy and Religious Studies at Kings University College, The University of Western Ontario. He has published articles in Journal of Film and Video, New Review of Film and Television Studies and Scope, and in various book collections. 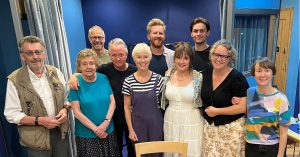