In this post, Tony Berber Sardinha and Marcia Veirano Pinto detail their corpus based research on American television and off-screen registers for an article appearing in Corpora. Read the full article including details of the methodology and results here.

What was your goal when conducting this analysis?

Television is among the inventions of the twentieth century that has had the greatest impact on society. We wanted to determine how homogeneous/heterogeneous the language of television is as well as to how it compares to the registers of English. Our study is concerned with the issue of the distinctiveness of television verbal language – both across its constituent varieties and in relation to the other major types of human spoken and written language – and hopes to show (on linguistic grounds) the degree to which particular TV registers resemble or differ from one another as well as how they resemble or differ from other forms of human discourse.

Have there been other similar studies?

Studies on the verbal language of television have been carried out on a range of registers. One of the pioneering studies on television language was conducted by Liberman (1983), who treated verbal television language as a single register by selecting texts on the basis of audience share only. In his study, Liberman analysed one script each from eight mass audience television series: Buck Rogers (‘Buck’s Duel to the Death’), Charlie‘s Angels (‘The Wayward Angel’), Dukes of Hazzard (‘Southern Comfurts’), Happy Days (‘A Potsie is Born’), Little House on the Prairie (‘Back to School’), M*A*S*H, Mork and Mindy and White Shadow (‘Artist’). For each script, he investigated features such as vocabulary, sentence and utterance length, sentence type, and figurative language, ultimately concluding that, in general, mass audience television series are poor models of syntactic and semantic complexity. In our study, such programmes are classified as distinct registers (mini-series and drama series) as we are interested in determining how close/distant they are from other TV registers (e.g., non-fiction series, courtroom programmes and news live) as well as other registers in English, such as general fiction, planned speeches, editorials and press reportage. 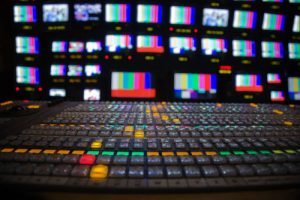 Two other recent studies were conducted by Bednarek (2010) and Marshall and Werndly (2002). Bednarek (2010) analysed interjections, frequent words, and n-grams of different sizes in a corpus of the American sitcom Gilmore Girls, concluding that large differences exist between the dialogue in the sitcom and colloquial conversation, including a higher occurrence of emotional and emphatic language, a lower occurrence of vague language and fewer fillers. Marshall and Werndly (2002), on the other hand, investigated several British TV programmes – finding a number of linguistic characteristics, such as denotation, connotation, polysemy, metaphor, hesitation markers and backtracking – with a view to using TV in the language-teaching classroom.

Should there be more studies conducted?

Yes. Television has an extraordinary history as the chronicler of daily life and, because of its ability to respond to new challenges, it seems to be here to stay. Linguistics in general and corpus linguistics in particular should devote more attention to this form of entertainment that is human – all too human.