This ‘valedictory’ editorial appears on the EUP Blog in two parts and is published in Volume 7 of Victoriographies, a journal of Victorian writing in the long 19th century, 1790-1914. 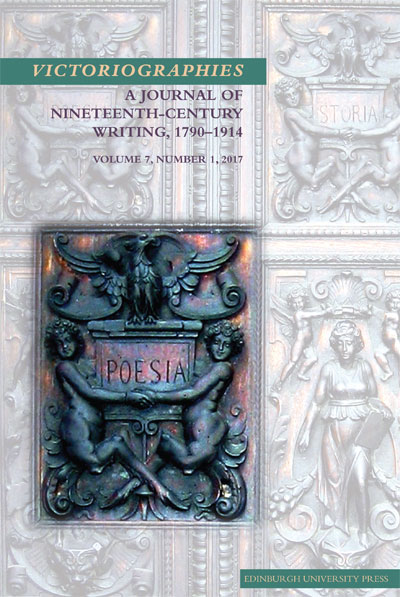 The point of this brief polemic, this not so rural ride?

Well, if we learn anything from Victorian literature, and the literature and culture of a long nineteenth century, it is this: we can talk all we wish about science and technology, the university can today increasingly be driven by corporate models and interests, and the humanities surrender more and more to jargon driven scientific paradigms of what constitutes research, research collaboration, interdisciplinarity, funding schemes, everything increasingly, insistently seeming to be about the endless measurement of facts, statistics, and the ‘facilitation’ of the machinic (grad)grind of self-justifying utilitarianism. In becoming this, in being forced relentlessly into this straightjacket, the humanities in general, and literary studies in particular is something that the culture thinks it needs (like some northern factory owner believing culture can be bought), we forget that other aspect of the ‘Victorian’, its sense of wonder, imagination, delight, play, hilarity; for every ‘decline and fall’, there is a wonderland, for every ‘reader I married him’, there is the admission that closure is merely a convenient fiction; it’s all just a question of how you choose to read. That is there everywhere in Dickens of course, both the best and the worst of times, however melodramatic or hyperbolic the New Historicists’ (some at least) may have found that, not realising that there was more than one way of representing reality and historical truth. (Truth in exaggeration is still truth; melodrama is merely another mode of representation.) But it is also to be found in so many other places, so many other authors, and while historicism’s relentless drive to pin down the grim truths of the nineteenth century, and so reproduce them in their mimetic-critical fidelity (as if they were Victorian lepidopterists), there is much more than this ‘reality’ that the present-day historical guilt complex of neoliberals in the present seeks to expose. (Victorian ecocriticism anyone? What will be the next disaster du jour as Madagascar registers 92% of the loss of its forest while yet another international conference gathers to situate the blame firmly in the 1850s.)

Why is there the insistent need to Gothicise the nineteenth century so much of the time?

There is though no one past, no one way to tell the past and everything is up for grabs; the stories we choose to tell are always about ourselves, our present. Neither Sarah Waters nor Michel Faber hold the copyright on narrative authenticity, even though the BBC readies itself for one more largely nude romp, with all the sophomoric joy of the teenager believing itself to be showing the rest of us something it thought we’d never imagined in the first place. And neither is there one future, the real future is that which cannot be programmed. Every narrative, whether set in 1856 or 2156 is ‘really’ about the present. No one ever had a problem realising this about Star Trek; so why is it so difficult to admit about the texts of a more historically, yet somehow strangely familiar, past? Why is there the insistent need to Gothicise the nineteenth century so much of the time? There is so much more to be read, the remains of a culture remaining to be read reflecting on itself, distancing itself from its own present by engaging critically. Imagine reading the Victorian canon as so many acts of singular performative inscriptions, so many articulations of performative Verfremdungseffekt. Dickens’ animus toward the ‘Victorian’, or, as he might have thought it, the contemporary present, is evident in that so many of his novels are set in the 1820s; Tennyson equally had, as James Spedding recollected from 1835, an ‘almost personal dislike of the present’. George Eliot is hardly optimistic when a character says of the railways at the end of the ‘20s, ‘here comes the future’, and Browning, Collins, and Gaskell know that the narratives of the past are always unreliable, driven by the perceptions, perspectives, and vested interests of the present, as well as the unconscious drives of that same present. If as Harold Pinter pointedly observed, the past is what you remember, imagine you remember, convince yourself you remember, or pretend you remember, what does this have to say about the present view of the Victorian from both scholarly and extra-scholarly perspectives? And what does it give us to read about ourselves, as if we were our own ancestors, as if we were Dickens, Eliot et al all reading forward, taking the long view on the first quarter of the twenty-first century? Isn’t the recent and present insane[i] desire on the part of university management in the UK to measure everything, to speak of ‘metrics’ and to know ‘impact’ as a quantifiable, simply the most disingenuous and meretricious manifestation of a certain ‘Victorianism’ or, more appropriately, the trace of a particular Victoriography? Every Dean, every Pro-Vice-Chancellor, should be given a tee shirt on appointment (in the university’s branded colours of course) on which is printed Gradgrind’s most famous remark – or ‘Gradgrind, c’est moi’.

What does this have to do with the price of fish?

Perhaps nothing, or everything, or something in between. The principal purpose however of this ‘editorial’ – someone called it a ‘valedictory’, which sounds rather too grand, all things considered, and I don’t think I’m quite dead yet; all I did was suggest a new journal of Victorian studies and studies in the long nineteenth century, seven or eight years ago, which returned, or at least had the weak hope of returning criticism to writing about the text and the act of reading literature as literature, rather than fussing over what is true, what false – the principal purpose is to bring my tenure as Editor to a close. When Jackie Jones at Edinburgh (whose sense of publishing has always been infallible, her judgement and acumen, her erudition unparalleled and her acuity without peer, the best; her generosity of vision matched by only one other publisher in my quarter century of publishing) suggested I speak with Sarah Edwards, Edinburgh University Press’s Journals Editor, and someone who has always been the most clear sighted and enthusiastic of editors, with whom it has been my pleasure to work, about writing a proposal for a new journal of Victorian studies, I little thought the journal would be quite the success it was. I wish therefore to thank, in all humility, and from the bottom of my heart, Jackie and Sarah. Ann Vinnicombe too, the Managing Production Editor, whose efficiency is only matched by her cheerfulness and professionalism.

Then Diane Piccitto, whose acquaintance I first made when she had just completed her PhD. I had asked her supervisor if she could recommend anyone to me to be part of an editorial team for overseeing copy-editing and proofing, and Diane’s name was put forward. Diane quickly became truly indispensable, so much so that I asked her if she wished to be co-editor of the journal. She accepted readily and has been the most wonderful co-editor, so enjoyable to work with, so easy too. (How many of us can say this of our colleagues? Though perhaps, having the Atlantic between us might help mitigate for Diane the irritations I’m sure I’ve caused on more than one occasion.) Thank you, Diane. I would also like to take the opportunity to thank the Book Reviews Editors past and present: Megan Becker-Leckrone, Kate Hext, Chris Pittard, and Amy Huseby, and with them the graduate students who have worked as the editorial assistants and have, without exception I think it’s fair to say, with assiduity, celerity, diligence, and rigour.

This editorial finds itself in the first issue of Victoriographies of the journal’s seventh year. I ‘step down’ officially (I really must put it in my diary; I’m still ‘Victorian’ enough to use a paper artefact and neither my phone nor some app). Taking over from me as Co-Editor with Diane will be Patricia Pulham, who is very well known to Victorianists the world over. Patricia is a colleague at the University of Portsmouth, and currently Secretary of BAVS. She is a wonderful colleague, her knowledge of decadent writing, Victorian spiritualism, neo-Victorianism, and the intersections between nineteenth-century literature, art and aesthetics, second to none. When I decided to go read something less strenuous than Victorian literature (there are still all those Derrida seminars to be published), Patricia was my first, and only thought and choice, someone who I trust completely and have absolute faith in, in taking over my role and doing it far better than I ever have or could. Thank you, Patricia, for agreeing so readily. I can think of no one in whose hands Victoriographies will be safer than you and Diane.

The scene ends, the curtain descends.

We might, in conclusion, do well to remember, to bear in mind and so take into the future, whatever future that Victorianisms might have, and indeed, that Victoriographies may have, three remarks. (On the one hand…On the other hand….) The setting? ‘The room to present the appearance of belonging to a sporting literary barrister [is that Victorian enough for you?], – books, pictures, whips [BBC Head of Drama take note]; the mirror stuck full of cards (painted on cloth): a table, chairs, etc. As the curtain rises a knock heard…door [opening] at left’:

Poulet: It is as if duration had been broken in the middle and man felt his life torn from him, ahead and behind. The romantic effort to form itself a being out of presentiment and memory ends in the experience of a double tearing of the self.

Barrie: Don’t forget to speak scornfully of the Victorian Age; there will be time for meekness when you try to better it. Very soon you will be Victorian or that sort of thing yourselves; next session probably, when the freshman come up.

Miller: No such issue…would have likely seemed necessary in Victorian England…. To middle and upper class literate Victorians the assumption that literature matters quite a lot was so much taken for granted as almost never to be a matter for interrogation. Think of it! The Victorians had no film, no radio, no television, no video games, no DVDs, no Internet, no iPhoto. Such technological impoverishment! They had only printed books, newspapers, and magazines to satisfy their needs both for reflective mimesis and for enjoying the imaginary.

The scene ends, the curtain descends. Think of it, indeed, when thinking of the days that are no more, and imagine that the present on which you write when writing of the past is not yours but the other’s. Anything else is merely cultural imperialism. Rather than seeing ‘spirit of the age’ (ours or the Victorians, so-called, to make a momentarily false distinction or, at least, a distinction as false as it is true) as the cause of a work of literature […] so that the work becomes a symptom of the age [whichever one you choose to believe you’re writing about] and altogether determined by it, [… remember] the other side of the truth [… seeing …] the creative vision of the Victorian text as in part determining the “Victorian spirit” itself [.…] each sentence or paragraph […] defines a certain relationship between an imagining mind and its objects [….] a certain relation between mind and world [….] At the heart of [every text,] revealed in glimpses through each event and image, is an impalpable organizing form, constantly presiding over the choice of words. This form, if we can discover it, will be a better clue than any biographical data [or any historical contextualisation, any sociological analysis of tropes taken as realities] to the writer’s intimate relation to the material world [….] A novel [a poem, any text] is the embodiment in words of a certain very special way of experiencing the world.[ii]