Q. Tell us a bit about your book

Q. What inspired you to research this area?

A. Well, a couple of things. Firstly, I grew up in Ireland in the 1980s and 1990s in what I now realise was the twilight of a theocracy. With that backdrop it is only natural that the philosophers I was drawn to – Heidegger, Nietzsche, Derrida, Hegel – all try to make sense of finding meaning in a godless world. This is also the case with the literary writers that I was drawn to – Dostoyevsky, Nabokov, Joyce, and latterly, Roth, Morrison, Knausgaard, and of course Cormac McCarthy. All these writers and thinkers respond to Nietzsche’s questions of the death of God in one way or another. Secondly, and this was also a motivation to write the book, what impresses me about these writers in the round, is they take up what comes after nihilism without indulging in it; discourses on nihilism often devolve into tedious rehashing of reactionary pessimism, declinism and cynicism.

These writers – McCarthy too, I would say, despite often being labelled conservative – asks, shows, confronts us with what can come afterwards. They write to make explicit what forms of life, commitments, and types of solidarity we can adopt to improve the material conditions of our world. That is why McCarthy, whose works are as violent and bleak as any literature can be, is so endlessly fascinating: his novels, plays, screenplays, and philosophical essays make explicit how we can do good things in the worst of all possible worlds. And that thought is profoundly appealing to folk and also explains why a book like The Road is a bestseller.

Q. What was the most exciting thing about this project for you?

A. Getting it finished! This took a lot of work, over 10 years on and off, in which time I also had my day job, my first daughter, and a pandemic to balance. So getting the project over the finish-line was the best part of the experience.

Q. Did you discover anything particularly strange or surprising? Did your research take you to any unexpected places or unusual situations?

A. Texas! I loved Texas. What a place! What surprised me was how similar it was to the part of Ireland I grew up in (County Kerry), notwithstanding the size, the heat, and the guns.

Q. Did you get exclusive access to any new or hard-to-find sources?

A. I wouldn’t say exclusive access, but I did travel to the Cormac McCarthy archive in San Marcos, Texas. That was a fantastic experience and rekindled my love for the Humanities. I also learned the value of Robert Caro’s maxim, ‘turn every page.’ Researching is difficult, painstaking, infuriating and oftentimes seems hopeless. I think all writers are probably haunted with the possibility their work doesn’t really matter. But doing the archive work showed me that relentless patience and focus are fantastic pleasures in themselves. To do a job where you are allowed get lost in your thoughts is an enormous privilege.

Q. Has your research in this area changed the way you see the world today?

A. I think so. McCarthy has a bit of an anti-authoritarian, anarchistic streak which I came to appreciate. In the end, one of the things I found myself thinking about more was the importance for philosophers of the question of freedom. It’s something really central to how we do philosophy since Plato, and I think McCarthy’s writing convinced me it is something that we ought not neglect.

A. Philosophy! I plan to read and do Philosophy until I die. In the interim I am starting work on the Philosophy of Film. I have been writing on the film-theory of Maurice Merleau-Ponty and Henri Agel. I also plan to write on the work of Belgian filmmakers and philosophers Jean-Pierre and Luc Dardenne.

Patrick O’Connor is Senior Lecturer in Philosophy at Staffordshire University. In addition to Cormac McCarthy, Philosophy and the Physics of the Damned, he is the author of Atheism Reclaimed (Iff Publications) and Derrida: Profanations(Continuum, 2011). He is the host of the Thales’ Well Philosophy podcast. 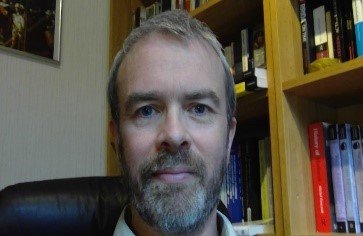