Evolutionary theory is a contentious issue, with even its own scientific veracity being denied. It is a subject of constant discussion and dispute in the media, popular culture and across many disciplines in academia. We need only think of the recent TV series of Orphan Black and of Google’s doodle on 24th November 2015 to celebrate 41 years of the discovery of Lucy (whose existence threw into question previous theories of bipedalism and brain size). Lucy’s existence shows us that the science of evolution is itself in the process of being uncovered, and yet, despite such uncertainties, little scientific emphasis is placed on what is at stake in proposing, accepting and discrediting particular interpretations of evolution. We often see a religious contention, which asserts that evolution is simply wrong, but what if we can think of evolutionary theory differently from the narrative that was challenged and rethought through the discovery of Lucy? 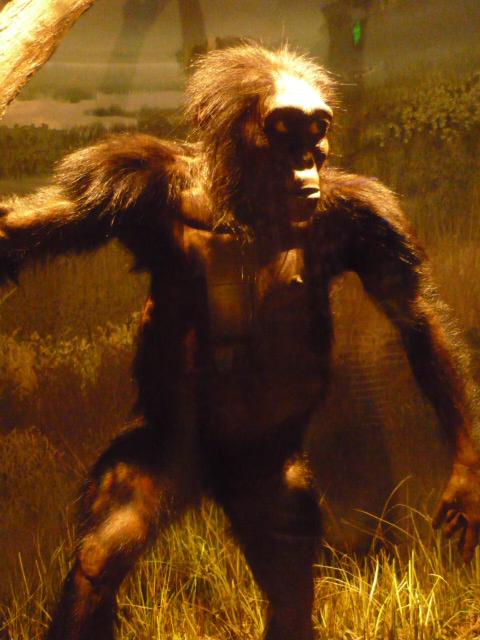 Google’s marking of the 41st anniversary of the discovery of Lucy reminds us that her name is taken from the Beatles song that was played repeatedly in the tent where the archaeologists worked on their recent spectacular find. However, it immediately brings to mind the Lucy of Jamaica Kincaid, which charts the travels of a young Caribbean woman of colour who migrates to undertake work for a white family in the US, caring for their children. Lucy is not a neutral name, but brings with it images of whiteness, and in Kincaid’s text a strong critique of whiteness as structural occupation of space that allows for an exercise of authority, which extends from the colonial context of the Americas through to contemporary US politics. Indeed, I connect Lucy to Kincaid’s novel Lucy precisely because evolutionary theory has been central to authorising narratives of colonialism. Its emphasis on moving from one lesser state to a superior, more developed, embodied and intellectual existence was the rhetorical and intellectual justification for much imperial expansion and colonial violence. Mobilising evolutionary theory as a socio-political foundation for geo-political expansion and occupation, as well as embodied and psychological abuse, centred around the human as having particular characteristics. In this sense, only certain people were human and others could only aspire to evolve to such a superior state. Indeed, it resulted in a human-centred view of the world that not only failed to see how humans were related to animals, plants, bacteria and other species, but that also insisted the human was a point to be arrived at, something to be achieved, and only available to the dominant.

In my article in Somatechnics, ‘Hopeful Monsters: A Queer Hope of Evolutionary Difference’, I take my cue from feminist scholars who have critiqued evolutionary theory from a postcolonial perspective, including Ann Laura Stoler and Anne McClintock. Yet, like Elisabeth Grosz and Myra Hird, I choose not only to critique the theory and its consequences, but to actively engagement with the writings of evolutionary theorists. I agree with Grosz that, as feminists, we might take from these texts new modes of thinking notions of difference, race, sexuality, embodiments and other important ideas that have been interpreted as only negative and derogatory. However, my focus is not Darwin, but a lesser-known theorist who is currently on the rise because of work in epigenetics: Richard Goldschmidt.

Goldschmidt is not a popular evolutionary biologist, although Stephen J. Gould has attempted to revive some of his work and show its significance to contemporary thinking on evolution. The problem with many of Goldschmidt’s ideas is that they have been proven wrong by research in genetics. Having said that, as Gould shows and as epigenetic research is further consolidating, much of what he said in other areas is possible. I focus on his doomed theory of the hopeful monster (doomed simply because its naming is too ‘non-scientific’, despite scientific researchers being obsessed with the monster). Goldschmidt believed in evolutionary leaps, that within one generation there could be the creation of a new species – an impossibility for neo-Darwinists. What I argue is less for a raising of Goldschmidt to posthumous glory, and more for an attention to how his theories permeate contemporary popular culture. The films series X-Men and Hiromi Goto’s short story ‘Hopeful Monsters’ are two examples of what I see as a wider shift in thinking evolution in our current times. What I wanted to ask was: what is at stake in exploring other narratives of evolution? What happens if the story is not linear and if different species are related? As I say in the article, what if the human can have a tail and what are species if new ones can be created within one generation?

Evolution is often interpreted as linear, biological and giving neat answers, but it does not, and Lucy is one example of how the narrative and theory do not quite hold together. Queer and postcolonial theory are reading strategies for exploring how evolutionary theory may be reinterpreted, not necessarily to validate and render ‘natural’ our often outlawed existence as queers, crips or people of colour. On the contrary, I wanted to explore both how to decolonise a field of scientific theory and how to unpack those points that do not quite cohere, do not give neat answers and are rather queer. By focusing on the hopeful monster, I sought to bring to the fore those rejected bodies that Goldschmidt thought were essential to survival. Difference, for Goldschmidt, was recognisable and vulnerable, and yet it was the very way in which the planet and its inhabitants could continue together as integral beings each dependent on the other. This is a monstrous concept of hope that does not offer the certainty of difference being a celebration of diversity, which tends to render invisible the real consequences of embodying difference, but instead shows the deadly effects of change as radical difference results often in death. Hope is not the idealisation of difference as the mode of survival; it is a glimmer of monstrosity as an interrelationality between environment and animal species that refutes a logic of multicultural celebration and colonial violence. It is queer because it cannot separate plants from animals from humans, and because subsequent species are related and yet different. It is a monstrous hope of possibilities, of an unknowable future, where difference is a matter of survival.

I did not want to write a different history of evolutionary theory, but I did want to examine why Goldschmidt’s theories were and are ridiculed, and why popular culture is so attracted to leaps in species. Indeed, if we are to understand evolutionary theory and its socio-political potentialities and constraints, then we also have to think with those for whom science is not only questionable but also a potentiality. Monsters may not sound so scientifically sound, but for Goldschmidt they are the promise of hope. Monsters embody difference as the unknown possibility of continuation in ever newer and interrelated forms.

Donna McCormack is a lecturer in English Literature at the University of Surrey. Her main research interests are biotechnologies in fiction; evolutionary theory; postcolonial studies; and queer theory. She is currently working on her second monograph, with the working title: Recycling Global Life: Human Organ Transplantation in Contemporary Visual and Literary Texts. Her first monograph, which focuses on how it is possible to remember the unspoken and the unspeakable in cases of familial and colonial violence, is entitled Queer Postcolonial Narratives and the Ethics of Witnessing (Bloomsbury Academic Press, 2014).

Image credit: Reconstruction of “Lucy” using its remains. The picture was taken at the Natural History Museum in Washington DC by Donmatas (via Wikimedia Commons).