In 1605, Ben Jonson and George Chapman found themselves in prison because parts of their play Eastward Ho (written also with James Marston) had offended King James’s Scottish favourite, Sir James Murray. Jonson and Chapman took to their pens to get help, sending pleading letters to various contacts to press their case and mobilize support. Ten letters survive in an early seventeenth century manuscript (now Folger MS.V.a.321) that we believe document the poets’ attempts to attract attention to their plight, plead their innocence, and mobilize key allies to help them access James I. My article addresses these letters and the ways that Jonson and Chapman employ their social networks to winning effect, by applying a sociological concept called The Strength of Weak Ties (SWT). In thinking about the “social network,” the status of seventeenth century poets, and the prominence of modern obsession with social media, I couldn’t help but imagine a mutation of the letters if Chapman and Jonson had been arrested in 2015. Would they—or their personal assistants—be busy tweeting their case? For example, might we see:

Ben Jonson @BigBen
In prison again. If others have transgressed, let me not be entitled to their follies. @Salisbury #IloveScots

Or perhaps they would have offered up a “vaguebooking” status on Facebook: 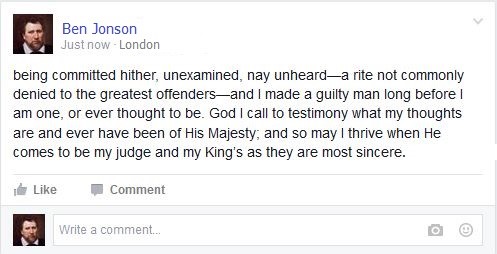 Of course, because I have used Jonson and Chapman’s own pleading words to Robert Cecil, Thomas Howard, and Esmé Stuart along with the trappings of Twitter and Facebook, these examples seem a little odd—and hopefully a little funny. But my goal was to point out the difference between the way we use social media and reach out to our networks of friends and contacts compared to the formality and seriousness of Jonson and Chapman’s missives. Social media platforms have made the idea of social networks into an everyday commonplace. In the digital world, we can use hashtags, followers, and likes to map the ways that we are connected to those we know and don’t know, and to see the ways that celebrities, artists, and those in government (even the Queen uses Twitter!) interact with individuals and the public. But the basic elements of social networks are very much human, and the tricky thing to understand about them is what the connections between individuals actually mean and what kind of social “work” they can do. Though we do not have hashtags, likes, or followers—or sometimes even proper addresses on the men’s letters—to help us trace the way Jonson and Chapman connected to their contacts, my article uses networking theory, and specifically SWT, to propose a way that the poets could mobilize social capital even when they had seemingly little leverage to do so.

Read ‘Eastward Ho and the Strength of Weak Ties for Playwrights and Patrons’ in the Ben Jonson Journal, 22.2.

Dr. Kelly Stage is an assistant professor of English and a member of the Medieval and Renaissance Studies program faculty at the University of Nebraska-Lincoln. She specializes in Renaissance drama and the literature of London, with a general interest in critical approaches to place, space, and cities. She has published in Studies in English Literature and in the collection Representing the Plague in Early Modern England (eds. Totaro and Gilman), and has an article forthcoming this winter in English Literary Renaissance.