As I was thinking back on the writing of the recently published François Laruelle’s Principles of Non-Philosophy: A Critical Introduction and Guide, I kept thinking of Laruelle’s discussion of his own writing about the work of other philosophers. In an interview conducted by John Ó Maoilearca and Marjorie Gracieuse, Laruelle responded to a question regarding his method this way:

I have always used two philosophies at the same time. Heidegger and Nietzsche, then Derrida and Deleuze. So it is always a matter of how to eventually combine several philosophies. […]

Research in the field commonly known as ‘Continental philosophy’ is often accused of the bad habit of trend chasing. The popularity of one figures wanes as a new industry of commentary waxes. Of course, this criticism is largely unfair to the work of many philosophers and researchers in philosophy. Texts like the recent Bloomsbury Companion to Continental Philosophy (formally Continuum Companion to Continental Philosophy), edited by Beth Lord and John Ó Maoilearca, highlight the thematics and questions that drive the various research paradigms within Continental philosophy.

There is still something that the critics are right to caution us against. Undoubtedly, those of us trained in the traditions of European philosophy from phenomenology to Marxism are tempted to become acolytes of the persons in our use of archives and figures that act as indexes. But there is still a real power and possibility in this use of an archive, an index or a tradition. While perhaps the critics of Continental philosophy are clear sighted regarding the inevitable inherent pitfalls of this approach, attention is rarely given to the fundamentally communitarian tradition here. This tradition has, at its best, been better connected to the lived reality of the cultures, language and everydayness these philosophical works emerged from. This is even true when these philosophical works are critical of that culture and, I would hazard, especially so.

The most insightful and inventive thinkers in any tradition recognise the ultimately false nature of these boundaries. This includes philosophical ones even when they would rather not recognise themselves as relative and contingent communities of tradition. The most interesting thinkers simply go where thought is at play, including outside the boundaries of the academic guild of philosophy.

When I first encountered the work of Laruelle, he struck me as just such a figure.

My undergraduate training in philosophy was precisely in the methods of Continental philosophy. I was taught to think through the history of thought, through the works of others, to study the archive and to deploy it in new ways. I was taught to translate thought from one domain to another, to take what was useful and well tested in method from here and there, in order to try and do something worth the name of philosophy. At least worth what we intend as the most beautiful about that name.

For my earlier apprenticeship the most important philosophical figures were Derrida and Deleuze. Their work diverges a great deal, of course, but they both worked through the history of philosophy to answer questions that were bigger than that history. At the same time the answer they gave differed, even on the question of difference itself. A difference regarding difference that we might index with reference to the figures of transcendence and immanence respectively. I struggled to find a method that allowed me to engage with both of them, to make use of both of them, that didn’t try to hastily cover over their differences. More than that, I wanted to find a more explicit development of their implicit method of working through the history of philosophy. Derrida’s deconstruction, of course, offers its own rules but this was another example of divergence in their philosophy as such rules seemed at odds with Deleuze’s more constructivist method. 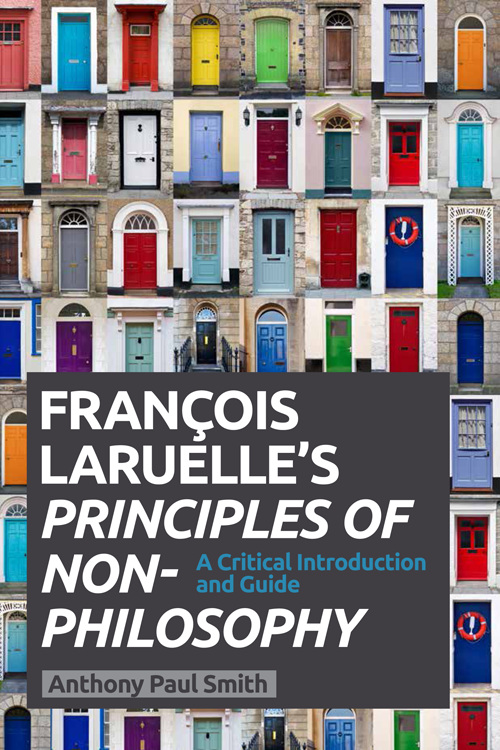 Laruelle had worked through this problem of the way Derrida and Deleuze differ and create a complete philosophy already in 1986 in his Philosophies of Difference (translated in 2010 by Rocco Gangle, author of his own critical introduction and guide to that text). His project of non-philosophy is a great many things but what first attracted me to study the project was the attentive and consistent way he treated philosophy and the names that populate it as simple materials for the project of thinking. With Principles of Non-Philosophy, Laruelle elaborates on the concepts and methods of non-philosophy with even greater attention. Yet he carries out this elaboration without much mention or textual analysis of the history of philosophy one sees in Philosophies of Difference. This is in part because Principles of Non-Philosophy aims to elaborate the very project it is detailing without any distance between that elaboration and the project itself. It is wildly constructivist and undeniably rooted in the history of the European philosophical tradition.

So when I was asked to write a guide to Principles of Non-Philosophy I wanted to do so in the spirit of non-philosophy. I did not want to write a text that pretended to be the definitive reading of Laruelle’s text. Instead I wanted to offer readers a kind of constellation guide so that they could plot their own course using his method for their own projects. I wanted to write a guide whose aim was not to elevate yet another figure for the commentary industry, a new trend to chase, but to help those who have been so long harassed by philosophy to find tools to disempower it and use it for their own work. Towards that end I focused on elaborating the history and concepts behind major concepts and methodological themes in Principles as well as my own glosses on those concepts.

At one point in the interview quoted from earlier, Laruelle responds to a question regarding his authority and ownership of non-philosophy with this remark:

Laruelle does not exist.

While of course he deserves the credit for his work, Laruelle is speaking here in a way that collapses the distance between explaining non-philosophy and practising it. There is to be no guru in non-philosophy, no new figure to genuflect before, though this is not an excuse to simply run roughshod over that work with poor readings. Instead it is an invitation to build with that work, to take it in new directions unforeseen by the one who developed the method used. It is in that spirit that I hope this guide is useful to those who wish to work with it.