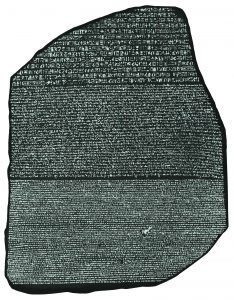 For the hordes of selfie-snapping tourists at the British Museum, one objects attracts more attention than any other: the Rosetta Stone.  Such fascination with the Stone and its hieroglyphs dates back centuries.  From the classical era through the Renaissance, scholars sought to decode the then-unreadable Egyptian hieroglyphs. Their eventual decipherment by Jean-Francois Champollion in 1822, and the discovery of King Tut’s tomb a century later, garnered worldwide attention.

What accounts for this fascination?  Why do we want to see the Rosetta Stone?

For one, the visitors to the British Museum come face to face with the promise but impossibility of perfect translation. The Rosetta Stone, engraved with the same message in hieroglyphs, demotic, and ancient Greek, has become the ultimate emblem of the transcendence of barriers of language and understanding (as the popular language-learning software of the same name makes clear). In the process, as one of the most recognized objects in the world it has become a symbol of universality. But for all but a few Egyptologists, the Stone itself is unreadable; the symbol of the triumph of legibility is illegible.

Hieroglyphs themselves have been understood similarly. During centuries of speculation about their meaning in the West, linguists and theorists thought they were visual images that speakers of any language might be able to understand. Yet these theories were mistaken, and hieroglyphs remained indecipherable for millennia. When they were finally decoded, Champollion revealed that hieroglyphs were largely phonetic as opposed to being visual.  In this way, they worked in similar ways to Western alphabets.

Hieroglyphs were therefore seen both as pictures and as a language, as both totally readable and totally unreadable. As such, they’ve served as a persistent metaphor for new technologies like film, which likewise promise to be a “universal language” of images that will be immediately comprehensible anywhere.  The tourists taking pictures of the Rosetta Stone are thus particularly appropriate; they are employing a technology that makes the preservation and dissemination of images far easier than it has ever been before. And yet, the object they are photographing mocks their attempts to capture it. While the digital images will likely vanish, sooner or later, into the ether, the Rosetta Stone sits there, tangible, material, and enduring through millennia. It is no wonder that early film theorists were drawn to the physicality of hieroglyphs, when their own medium, despite its promise of capturing material reality, had been seen from the start as mere shadows.

But hieroglyphs serve not only as a metaphor for the potential breakdown of cultural and communicative barriers; they also have been the focal point for debates about those very barriers.  Over the last two centuries, multiple groups have sought to claim the heritage of ancient Egypt. Racist nineteenth-century pseudo-scientists posited the Egyptian people as Caucasian in order to make the glories of ancient Egyptian civilization white and European.  By contrast, African-American intellectuals have re-claimed that civilization as black and African.  And twentieth-century writers in Egypt have pointed to the commonalities of ancient and modern Egypt to forge a united Egyptian nation.  The presence of the Rosetta Stone in the British Museum foregrounds those tensions—like the Elgin Marbles, it reveals the imperialist histories underlying seemingly purely aesthetic or linguistic concerns.

Just as the Rosetta Stone calls attention to the similarities and differences among its three different languages, so the hieroglyphs engraven on it similarly embody this in-between-ness, this not-quite-ness: not quite image, not quite language, not quite African, not quite European, not quite modern Egyptian. The Rosetta Stone and its hieroglyphs are so fascinating because they seem to promise a pure translation—either between language and language, or between media and the world, or between one nation and another. But that mythical unity remains forever tantalizing and unachieved.

Jesse Schotter is Assistant Professor of English at Ohio State University. His book Hieroglyphic Modernisms: Writing and New Media in the Twentieth Century publishes this month.