It would seem that elements of the Anglosphere have always required a bogey or a multiplicity of bogeys. Perhaps other spheres do too. It is certainly the case that the notion of coping with the feared evil ‘Other’ has also been a common literary trope and political leaders have used such othering as a means to their political success by aligning themselves against alleged threats to their own states and societies. Several of the articles in the September 2017 issue of Britain and the World deal with anxieties about such supposed oppositional peoples, governmental methods and ideologies. Among these we can find the major bogey of Communism, as well as fears of the perceived inefficiencies of absolutism, the Ottoman Empire, and the settlements and associated agitations that seemed to disturb the peace of the Middle East. These fitted into a long tradition. In the late eighteenth and early nineteenth centuries, the prime British bogey was of course the French. Later in the nineteenth century it became the Russian Tsarist Empire with its apparent designs upon the Baltic, the Black Sea, the Dardanelles and the North-West Frontier of India. These designs had complicated the British relationship with the Ottoman Empire, an absolutist Islamic polity from which Greece and Balkan states needed to be freed, yet required to be bolstered against Russia, at least until the Gladstonian outrage at the Armenian massacres. Today we can see a variety of bogeys including Islamic State or Daesh, militant Islam generally, Middle Eastern dictators, North Korea, and perhaps the renewed expansionism of the Russians.

Romantics like Byron had long seen the freeing of Greece as one of the most significant anti-absolutist, liberalising, nationalist movements of the nineteenth century. Yet, as Pandeleimon Hionidis describes, the result had been disappointing. Greece had remained backward, politically unstable and bankrupt, victim of a baleful combination of the incompetent and rapacious King Otho and the brigandage which reflected the lack of an effective rule of law. Hionidis explores the extraordinary paradox that in the same period, 1862–1864, the Greeks turned to Prince Alfred, son of Queen Victoria, to try to create a British style constitutional monarchy, with associated institutions, while at the same time the Ionian Islanders revealed their desire to escape from British imperial rule and re-unite with Greece. Hionidis seeks to unpack this apparent contradiction as well as demonstrating why the early 1860s were such key years in the nineteenth-century Greek trajectory.

In the following century, the problems of the Middle East were also associated with the decline and fall of the Ottoman Empire, notably with the efforts of European policy makers to create a new dispensation, not least through the highly contradictory Sykes-Picot agreement of 1916. The framers of this agreement could not of course have predicted the horrors of the Nazi persecution of the Jews and the Holocaust, but the British as the mandated power found themselves sitting on a powder keg of Jewish settlement and Arab/Palestinian resentment. As Ronen Yitzhak demonstrates in his article, Lord Moyne (Walter Edward Guinness, a member of the very wealthy brewing family) had the misfortune to be in the wrong place at the wrong time, Cairo in 1946. Leading members of the Stern Gang translated his statements into something beyond a potential anti-Zionism into anti-Semitism and he was assassinated in November 1946. As Yitzhak suggests, he was trying to negotiate his way through the complexities and contradictions of British policy and was almost certainly not anti-Semitic. Those who ordered, or supported, this assassination subsequently became very prominent in Israeli politics, which itself has lessons for the rehabilitation of former ‘terrorists’ in colonial territories and in Ireland.

Anti-Communist Co-operation between Australia, South Africa and Britain in the Early Cold War

Evan Smith turns to one of the major bogeys of recent times, revealing the manner in which the fear of Communism stimulated a whole range of responses in the Anglosphere countries in the post-Second World War period. Although the Russian bogey had been seen as a serious threat by British strategists from the Crimean War onwards, this threat was significantly ramped up after the 1917 Revolution. There is an interesting parallel between the manner in which some British political, literary and intellectual radicals hailed the French Revolution, seeing it as an exciting model in the pre-Terror, pre-Napoleonic era, and the welcome given to the Russian Revolution in similar quarters. Before the horrors of Stalin’s rule became fully apparent, the many western visitors to the Soviet Union were eager to view what they saw as serious political, social and economic lessons that might prove valuable for their own society. Nevertheless, the Communist threat to the British Empire was perceived from the start. When Winston Churchill was the Colonial Secretary in 1921–22 he sent a circular despatch to all colonial governors warning them of the dangers of Communist infiltration in the colonies and their fermenting of nationalist agitation. As Smith demonstrates, however, it was not until the 1930s, the early period of the Second World War and more particularly after 1945 that this anticipated threat really became a source of significant intelligence gathering as well as political and legislative activity, with the white settler ‘dominions’ constituting the main locus of these anxieties. Given the colonial context, these developments became a distinctively white, anti-nationalist concern, particularly in South Africa. But significant connections were made among Canada, South Africa and Australia, notably the latter two. Although these governments were principally anxious about potential internal subversion (as politicians would have seen it), nevertheless it did take international forms, not only in anxieties about the supposed alliance between anti-capitalism and the Communist model in Asian and African nationalism in the Empire/Commonwealth, but also in respect of the emergence of Communist China. Although the British-led Anglophone Commonwealth never indulged in the paranoia exhibited in the McCarthyite period in the United States, still Smith unveils through significant original research the fascinating connections and co-operative activities among the Dominions and Britain during this period.

Scots as a long-standing bogey of the English?

It is probably not stretching a point too far to see the Scots as a long-standing bogey of the English. This was certainly true in the reigns of Edward I and Edward II in the late thirteenth and early fourteenth centuries. It became prominent again at the time of Henry VIII, when the ‘rough wooing’ wrought havoc with the Scottish military and its aristocratic leadership, as well as almost completely destroying medieval Edinburgh. Cromwell vigorously attacked the Scots, as he did the Irish. In the eighteenth century, William Hogarth gave visual expression to the distaste for the Scots, as did the notorious remarks and definitions of Dr. Johnson, while the ‘Gordon riots’ of 1780 took anti-Scottishness on to the streets. Yet, at a time when the Universities of Oxford and Cambridge were more or less moribund, the Scottish universities took up a central role in the Enlightenment and Scots (and Scottish-trained graduates) came to pre-dominate in the medical profession. It is a striking statistic that between 1751 and 1800, over 85% of all doctors trained in Britain were graduates of Scottish universities. Scottish doctors were dominant in the employ of the East India Company, later throughout the empire and in the merchant marine. Scots were also highly visible as engineers, as educational and environmental figures (for example in forestry), as well as in maritime, mercantile and missionary fields together with trades like stonemasonry. Sometimes they became much resented colonial bogeys, as when a disgruntled Natal colonist enquired ‘Is this an English or a Scotch colony?’

The diaspora of Scots doctors ensured that the teachings of the medical schools of Edinburgh, Glasgow and Aberdeen, with their significant European connections, went around the world. Sarah Irving-Stonebraker here demonstrates the importance of Scottish training, particularly in Edinburgh, not only in the establishment of the medical schools of the American colonies and future United States, but also in the dissemination of Enlightened ideas, for example the ‘stadial theory’ so prominent in the thinking of leading Scots figures of the Enlightenment. Thus medical training becomes closely associated with early ethnography and proto-evolutionary notions of social development, combining ideas on disease with concepts of cultural development. It would be interesting to speculate as to the connections between these eighteenth-century intellectual ideas and the continuing American relationship with its indigenous peoples during the subsequent centuries.

Will Brexit will have any effect upon Commonwealth relations?

As we have seen, ‘bogeys’ are of course still very much with us. The Scots retain their bogey status in respect of the English. They voted overwhelmingly to remain in the EU when the English voted to leave. This has rekindled demands for independence and for another referendum, together with a characteristic remark by the Dundonian actor Brian Cox (ironically currently playing Churchill in a forthcoming film!) that the Scots are essentially internationalist, while the English are not (there is certainly an interesting historical ‘back story’ to that suggestion). For Theresa May, there is no doubt that the Scots are a thorn in her side. But she has a bigger bogey, nothing less than the other twenty-seven members of the EU who seem to be creating a common front against British demands for a favourable deal in ‘Brexit’. The right-wing press in Britain now (alarmingly) depicts the country as somehow virtually at war, at least a diplomatic, social and economic one, with the rest of Europe. EU figures like Jean-Claude Juncker and Donald Tusk, as well as prominent politicians like Angela Merkel (interestingly very popular in Scotland according to a recent poll – certainly more so than Theresa May), are being demonised. A major theme of the 2017 election is the restriction of immigration, which some see as helping to fuel the relative success of the British economy in recent years. Immigration was certainly a major focus of the Brexit campaign which displayed disturbing elements of xenophobia. Among all these manoeuvres, the really interesting question for readers of this journal is probably whether Brexit will have any effect upon Commonwealth relations (and even Commonwealth immigration). Our Witness to History section considers this the ‘Case of the Century‘. It has certainly thrown Britain into the arms of Trump’s America, as well as rendering it dependent on global trade deals that could well take some years to negotiate. It all reflects yet again the extent to which the perceived threat of the dangerous bogey creates anxieties and instabilities that can be as debilitating as invigorating. 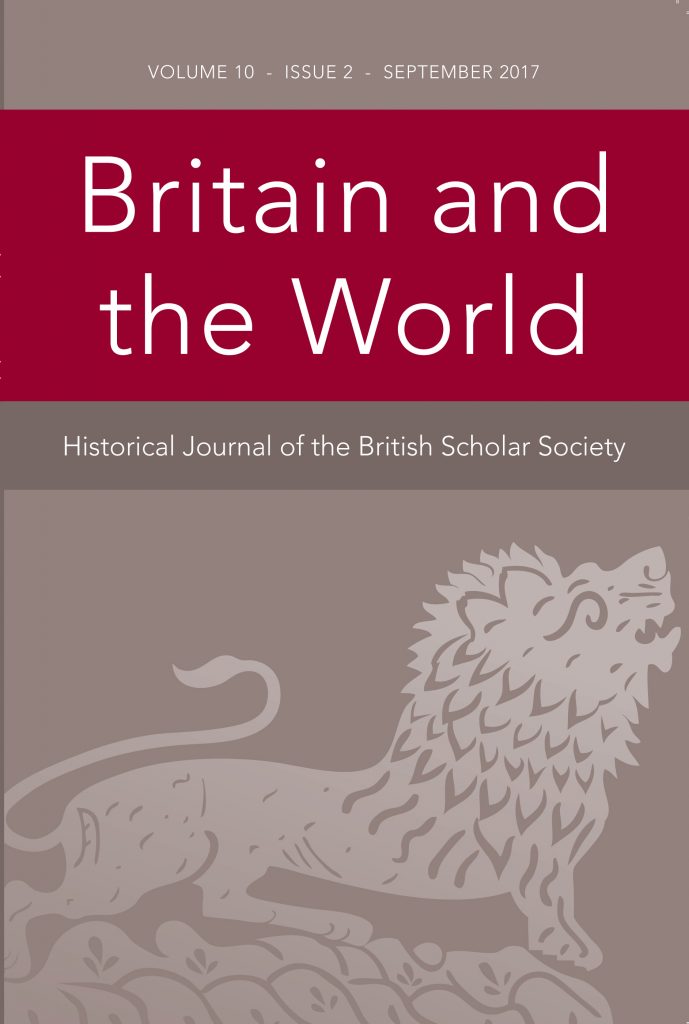 John M. MacKenzie is Editor of Britain and the World, a journal of ‘British World’ history, publishing biannually in March and September. This blog is adapted from his Editorial to Issue 10.2 (September 2017).

John was educated in Scotland, Zambia, Canada and London.  For many years he was at the University of Lancaster, holding the chair of imperial history (now emeritus). A fellow of the Royal Society of Edinburgh, he has many publications in the culture of the British Empire and in aspects of the Scottish diaspora. More information is available on his website: http://www.dalmackie.com/